ReadOnlyMemory6/6 (2020-2027) is a series of six animations (15-20 minutes) that recycle ancient myths about the creation/destruction of the world with today’s news. NY immigrant artists adapt folktales from their cultures, film handcrafted-puppets live in theater sets, and fuse the animation in post with documentary footage to create myths for the next generation.

(Colombia) A pre-Columbian creation myth of a man who hid the sun and the moon from three God-Monsters, revisited as a conquistador, land and slave owner, refugee crisis myth.

(China) A Chinese tale about a woman who created the four seasons with papercuts as a response to a cruel king who imprisoned her to make diamonds, revisited as an industrial labor urban myth.

(India) A black panther (nature) eats men’s sacred animals (gods) and is hunted by both Inuit and Indian villagers is recounted as a religious war-cycle myth.

(Syria) Gilgamesh epic poem about dangerous gods/kings and man’s lost paradise will dive into civil rebellion and the cataclysmic Syrian war as an apocalyptic myth.

(Slavic-Ukraine) The fire-bird tale about princes’ disobedience to their king and the challenges they face with a magical but dangerous firebird will create a Putin-Russia invasion myth.

(Scandinavia) Misha, a toy-bear, escapes home to walk free in the forest until he decides to give up his freedom for a sick little boy will be a self-sacrificial myth.

After an American bombardment, everything is destroyed in the north Korean Village of Yuwon, life is disrupted and the love ones are dead. The village stands up, and start living again.  Not far, in the forest, five French UN soldiers are lost and scared.  A young girl from Yuwon finds a wounded French caporal.  She helps him bury of an American soldier, he helps her to find her brother’s dead body.  She brings him back to the village.  This is the story of North Korean people whose reality is changedby the outside and the story of a soldier who becomes a man.

The play follows a “gut”, a Korean ritual for the dead who died violently in the Korean war. The spirits are stuck in shape of ghosts, and the actors will be acting as “mudang” or shaman, calling the names of the dead (civilian from north and south, Turcs, American, Chinese soldiers…)

Actors are performing the play for them, to please the spirits with dance, music and singing so they can scatter into nature.
In the show, the dead are represented by clothing which will be neatly folded at the end, and their names will be burned.  For this play the Wuturi Company is using Korean mask dance (with musical rhythm and precise gesture),Kung Fu (incorporated into the choreography), singing, and contemporary dance, text in formal Korean rhythm on the drum, and finally a study of propaganda art.

“A play rich of sense and sensational” Diversions, Dominique Demangeot
“Exceptional with intelligence, energy, power of poetry” JB Carasson, L’oizeau Rare
“The sacred and the dance are elements we should all imitate in our theater today”
Le bien Public, G. Malvoisin May 2009

“Their efforts to to search for a new style is the work that ensure our existence, it is an important work and I applaud their efforts” TIS Theater, Ha Hyun Joo

“The meeting between the traditional Korean theater, Wuturi rhythm and the French director has surpassed all the clichés of cultural exchanges… this play forces the north and the south to review their own history”  Sae Gae Newspaper 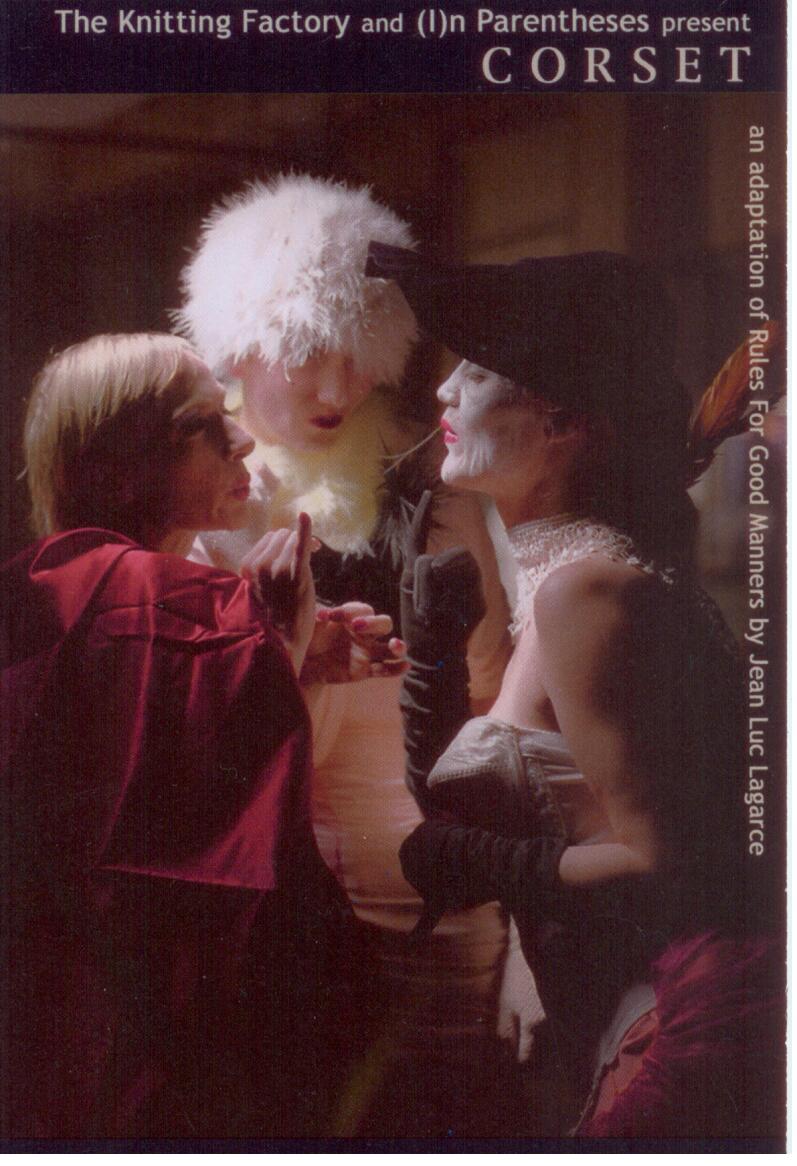 Five actresses portray the female protagonist.
The play uses Lagarce’s text as music, creating a female quintet chirping about rules of good manners and good postures, picking and pecking at strategies for afternoon tea, embroidering gossip into a jazz suite.

Performed at the Knitting Factory, New York City in 2001

A homeless man in the street of New York City transforms himself into a zealous butler, a spy, a colonel and a Master. He becomes prey to his own imagination and delusions, both hilarious and heart breaking: he invites himself for dinner and becomes an American Hero.  This is the rise to power of a crazy man in a world gone mad.

A.W.O.L. is a hymn to class struggle, a mini-opera for loneliness, and a symphony of a military regiment. With All Male Chorus as the crowd of businessmen and Masters.

The butler : “I could not possibly drop the platter; I will not drop the platter, these are my two hands holding the platter-no problem.   I have been in service since time began.   Take two steps back. Freeze. At ease.” 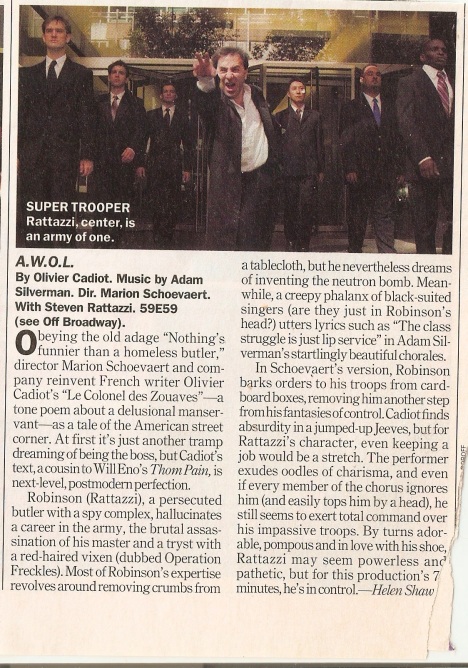 IPHIGENIA POINT BLANK was conceived in response to the refugee crisis as seen through the lens of the Iphigenia myth. It references Euripides’ plays, Iphigenia in Aulis and Iphigenia in Tauris, as its central metaphor and draws from the traditional form of the ancient Greek women’s lament from the Trojan and Peloponnesian War epics. It follows the plight and stories of refugees caught in the on-going war in the Middle East, the routes they travel to escape violence and the histories/stories they carry with them.

Today, we are witnessing the highest levels of displacement ever on record. An unprecedented 65.6 million people around the world have been forced from their homes. 22.5 million are under the age of 18. Over 4.8 million refugees have fled Syria alone. According to Amnesty International and the UN, 1,015,078 arrived to Europe by sea in 2015; 349,825 in 2016 4699 drowned in 2016 alone trying to cross the Mediterranean. On average 20 people are forced to leave their homes every minute as a result of conflict or persecution.

IPHIGENIA POINT BLANK aims to challenge the justifications for and mechanisms of war, from the Trojan war, to the invasions of Iraq and Afghanistan, to the proxy wars in Syria. Beyond bearing witness we contest the unending cycles of war that always result in devastation. 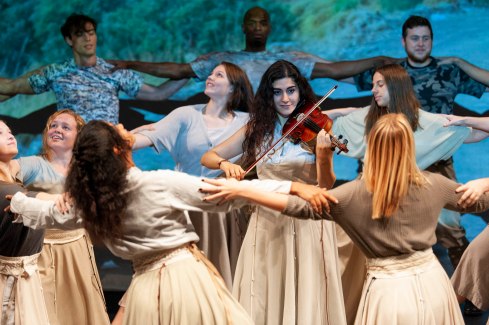 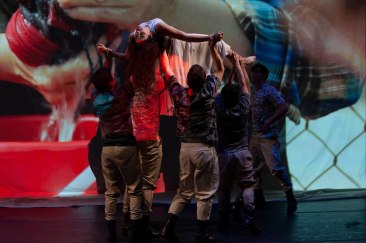 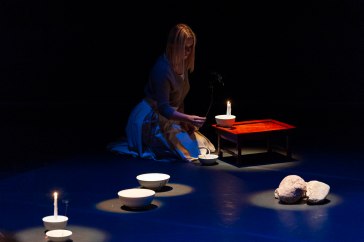 Inspired by the Jérôme Kerviel scandal in France, Bernard Madoff in New York, and Sung Wan-Jong in Seoul, the choreography will put into movements these fallen man-god, their rise and their crash in the arena of power using bullfighting and shamanism in a sacrificial and a purifying ritual, led by two “shaman-matador”.

We would like to collide the stakes of bullfighting with that of fast stock market competition, high frequency trading with shamanic trance, the crash with the collapse of the bull. A performance where ancient myths feed the myths of today.

Moloch is the ancient god Baal, to whom we sacrificed children. This monstrous god usually appear as a creature with the body of a man and a bull’s head. The statue of the charging-bull in front of Wall Street Stock Exchange represents power and market growth.몰록, Moloch in Korean means « collapse ».

We will enter the body of five businessmen eaten by numbers, five monsters devoured by themselves, possessed possessors, new demon of our times, half-god half-bull. Taking as starting point the Kerviel scandal in France, Madoff in New York, and Sung Wan-Jong in Seoul, fallen man-god, the choreography will put into movement their rise and their fall in the arena of power using bullfighting and shamanism in a sacrificial and a purifying ritual, led by a shaman-matador.

We would like to collide the stakes of bullfighting with that of fast stock market competition, high frequency trading with shamanic trance, the crash with the collapse of the bull. The text (written by Violaine Schwartz) will fly without any time zone from one language to the other (French, Korean and English) and will be organized in rhythmic grids, accompanied by a Korean drum (changu). This text will be the music of frenzy stock market and will counterpoint dances inspired by Korean Salpuris or bullfighting. A performance where ancient myths feed the myths of today. 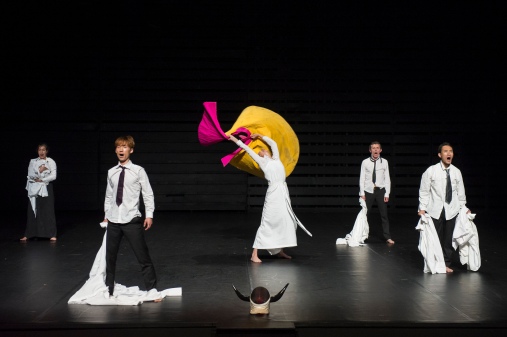